Situated on the banks of the Detroit River, Bayview is known as the Midwest’s “Shrine to Nautical Culture”. Many graduates of their junior sailing program have gone on to sail at the high school and collegiate level and some have even reached the Olympics. Their Adult Learn to Sail Program, offered to members and non-members alike, has been so successful over the past few years that they have had to increase the number of classes to accommodate the demand. The club also offers courses in Race Management, US Sailing Judging, and Safety at Sea.

In past years Bayview Members have brought home awards in the Moth Worlds, Richardson Cup, Cal 25 Nationals, Pineapple Cup, Beneteau 36.7 Nationals, U20 Nationals and DN Ice Boat Worlds. The club is responsible for organizing and sponsoring over 15 regattas throughout the course of the year, including the famous Port Huron to Mackinac Boat Race, now known as the Bayview Mackinac Race.

“Bayview Yacht Club in Detroit, Michigan has a motto that all its members live by, ‘Sailing, it’s who we are. It’s what we do’. This is why we are so proud to become one of the Founding Member Clubs of the National Sailing Hall of Fame. This endeavor to preserve the history and to promote the sport of sailing is something that is long past due in the United States. Sailing is an integral part of our American Heritage which will now be preserved forever within the Hall of Fame. The Sailing Center will also enable individuals from all walks of life to be introduced to this sport that we at Bayview Yacht Club are so passionate about. We are very excited to have been provided  the opportunity to play a role in this wonderful project and look forward to being involved in this endeavor to promote our sport for years to come.”

While the sport of sailing is the main focus of the Bayview Yacht Club today, the Club was founded in 1915 by four men, only one of whom might be called a sailor.  The history of the Club starts in Detroit, then spreads, not only throughout the Michigan area, but to the Atlantic Ocean then around the world.

Bayview has been a place where accomplishments on the water were more important than those off, where the mission of promoting the sport of sailing and those who sail, guides and informs everything about it. It is a Club whose members are there for one reason: to sail competitively.

So, how did Bayview start? With four men – Floyd Nixon, Lloyd Kurtzwarth, Perc Williamson and Paul Dietrich – who were looking for a place to fish and have fun on the water. They established Bayview in a corrugated-iron shack, on a dock about a mile downstream of the present location. The first sailboat to call Bayview home was Perc Scott’s “Wrinkle”, 18 feet at the waterline and capable of taking the entire membership out for a cruise.

Bayview incorporated in 1919 and started the first Club race that year, the Long-Distance race. By 1920, the popularity of Bayview was on the rise with the strong growth of the automotive industry in Detroit and, in a way, the nation’s implementation of Prohibition. A short sail from the Bayview dock would place members into the legal bars in Canada. It is not clear whether some brought back some prohibited liquids, but some reports indicate so.

By 1924, Bayview members extended the reach of the Club to the Atlantic Ocean by winning their class in the Bermuda race. Then in 1925, the Club launched its signature event that spread its fame and influence, the Bayview Mackinac race from Port Huron to Mackinac Island. This has become the longest continually run freshwater long distance sailboat race. 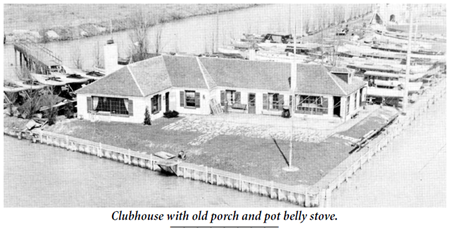 By 1928, the membership was outgrowing the corrugated-iron shack, and the Club purchased a strip of landfill along Conner creek, the place Bayview calls home today. Grand plans were drawn up with an Italianate design with large overhanging eaves and a tile roof with a wide lawn and swimming pool. Those plans were discarded as the fundraising fell short with the 1929 depression.  The spar shed was completed, but the clubhouse was completed as a cinderblock shell that was finished piecemeal by members over the years.

From those early years, the history of Bayview Yacht Club has been carefully documented. You are encouraged to pick up a copy of the book, “Rounding the Mark”. This history, written with the input of almost one hundred members, chronicles the first 100 years of Bayview and its members’ sailing achievements. Sit down with a favorite beverage and enjoy each chapter. 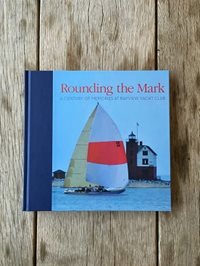 For more information on the History of Bayview Yacht Club,
check out an article reprinted from the 1990 Yearbook and Roster titled
“Seventy Five Years of Glory – A Trilogy” By Michael Thompson and
” I Like the Way “Scotty” Said It!” By Perc Scott.